Most of us are so busy with our own campaigns, we don't have much time to look at what our peers are cooking up. Here we take the opportunity to look at top PR campaigns and take some inspiration. It's also a good reminder that as you're looking to assess how your own campaigns have been performing, Meltwater is always here to help measure ROI, and provide resources, like our recent ebook on KPIs that PR and social media teams should be tracking to prove the value of their work.
Michelle Garrett
Share244
Tweet
Share

2018 was a banner year for brands who were able to think outside the box when it came to their PR campaigns.

Those that constructed PR campaigns that looked beyond advertising and considered how the campaign would play with the media were able to leverage their efforts to score some big wins in earned coverage.

Female empowerment was a thread in several of this year’s top campaigns.

They developed their PR campaign based on research that shows childhood role models are crucial in inspiring young people to consider a piloting a career.

The company shot a short film recreating the scene from the Leonardo DiCaprio film, “Catch Me If You Can.” The daughter of a real easyJet captain, Hannah Revie, portrayed the DiCaprio character. She’s flanked by an entourage of boys (also played by children of easyJet’s staff) acting as members of the cabin crew.

Currently, only 5% of all pilots worldwide are female. easyJet has set a target for 20% of new pilots joining the airline to be women by 2020.

Burger King is another example of a brand embracing women as part of its strategy in 2018.

To help commemorate the passing of a law allowing women in Saudi Arabia to drive, Burger King offered a free Whopper sandwich for every woman who visited one of its drive-throughs behind the wheel. The sandwiches sported a wrapper printed with the phrase, “Celebrating our driving women,” in both English and Arabic.

Beyond the WhoppHER effort, Burger King has had a number of successful campaigns in 2018. From its AI ads to its Whopper Neutrality campaign, the brand is seemingly everywhere. The ad campaigns drive media coverage, as well, with the brand appearing in publications from USA Today to Fortune to Food & Wine.

This, this right here is a cultural milestone!

Domino’s changed up its PR strategy when it developed its Paving for Pizza campaign. Adopting a corporate social responsibility (CSR) approach, the brand was able to score major media coverage for its initiative to pave potholes and improve the communities of consumers who have pizza delivered to their homes.

“The loose connection between roads and pizza delivery is just enough to give Domino’s justification to engage in a major campaign to demonstrate the company’s social conscience,” says The Guardian.

In an unprecedented move, Bud Light set up “victory fridges” in 10 bars around Cleveland. The refrigerators were stocked with Bud Light – and were to remain locked until the Cleveland Browns won a game during the 2018 football season.

Estimates were that the effort cost the company less than $6,000. The social media buzz alone more than covered the cost. There was significant media coverage in many top-tier publications, making this campaign a winner in more ways than one.

Here we see that Bud Light has enjoyed a streak of positive sentiment for the campaign in related news coverage. 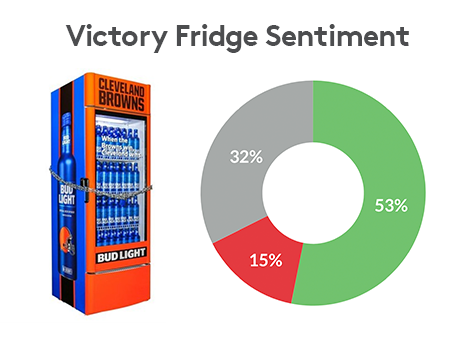 To appeal to millennials, Virgin Trains developed its #Avocard campaign, which was a hit on social media while earning more than 100 pieces of media coverage for the brand.

When many passengers in their mid- to late-20s were shut out of purchasing a “millennial railcard,” which was to provide a discount on British rail travel, Virgin Trains launched its #Avocard. These passengers could bring an avocado to the ticket office to receive a discount.

Because millennials are stereotypically fans of avocados, the brand hoped its campaign would successfully reach this important target audience. The effort received praise for its originality and effectiveness in targeting the demographic.

Virgin Trains are offering 1/3 off rail fares for 26-30 year olds… if you present an avocado when purchasing your ticket. Unusual but a fantastic marketing campaign! #Avocard #VirginTrainshttps://t.co/coADCATCCf

What Can PR Pros Learn from 2018’s Top PR Campaigns?

Which were your top PR campaigns that brought your team the most value, and glory? We can help you stay on top of campaign performance by enabling you to monitor your coverage and access all the data you need to measure PR’s impact on your business.

How to Ace a Brand Management Interview
by Heather Satterfield