YouTube has drastically evolved from its early days as a simple video platform. What started as a way for people to upload clips of themselves is now a powerhouse in social media marketing. YouTube offers a way for brands to get in front of large audiences at scale, either through their own channels or by partnering with influencers and creators. Not only is the platform now one of the largest search engines in the world, but the company also generates billions in annual revenue.

What does all of this mean for your YouTube marketing and social listening strategy? Let’s look at some key YouTube statistics and how you can use them to grow your YouTube channel, revenue, and brand image.

Let’s start with an overview of YouTube. This video-first platform emerged in 2005 as a tiny startup with the goal of making anyone and everyone the star of their own show, figuratively speaking. Founded by two engineers and a designer who met while working at PayPal, the platform has completely transformed content marketing as we know it.

Here’s a closer look at some of the most impressive YouTube stats.

YouTubers have made more than 51 million YouTube channels to date. YouTube has shown strong channel growth over the last couple of years, growing 36% since last year alone! (Tubics)

That said, there’s still plenty of room for brands to make a splash with their own content channel. Learn more in our blog post on how to create and manage a YouTube channel.

Video marketing has certainly taken over the digital space. Currently, active users are uploading 500 hours of video content to the platform every minute! That equals about 12,000 hours of content per day. (YouTube)

The top stats about YouTube mean very little if you don’t also understand the platform's audience. Who is using YouTube, and how are they using it? How much time do they spend here? What do they like and engage with the most? Read on for more stats YouTube marketers can use. 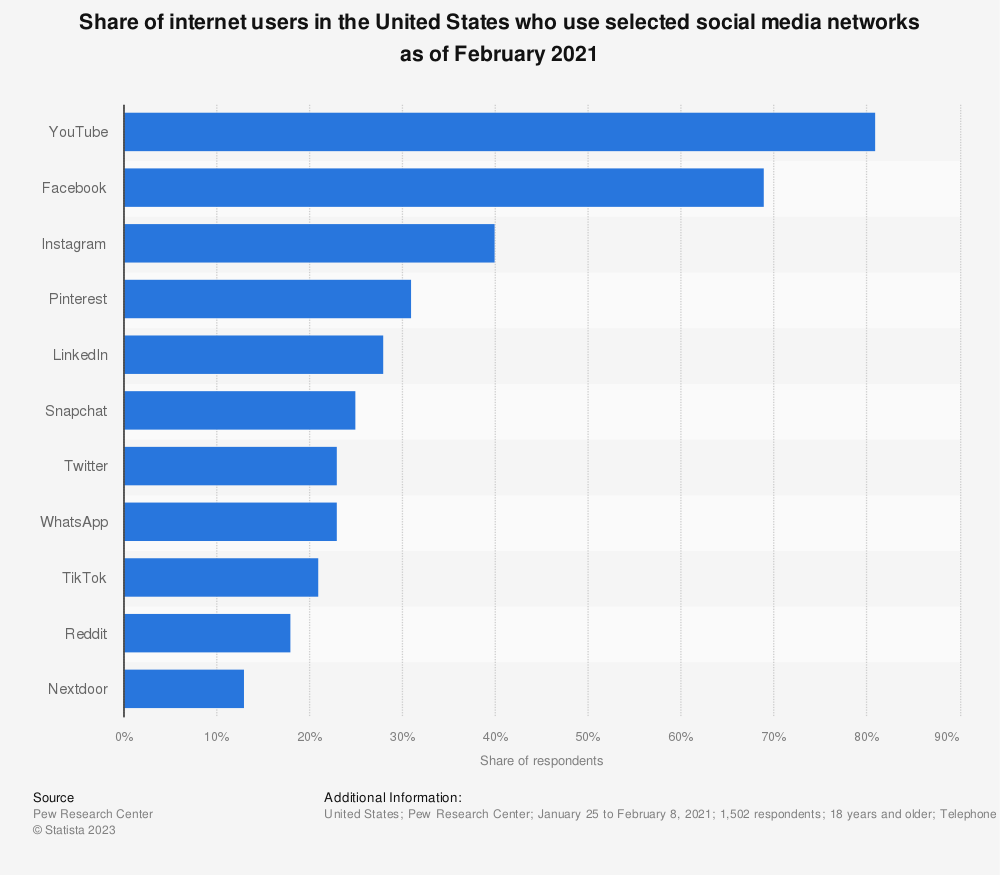 Who is the most subscribed YouTuber?

If we’re looking at individual YouTubers, PewDiePie takes the lead with 111 million subscribers. PewDiePie, better known as 32-year-old Felix Arvid Ulf Kjellberg, is famous for his video game entertainment and has a net worth of $40 million. At last count, PewDiePie’s channel features 4,467 videos. (Social Blade)

Which YouTuber has the most subscribers?

If you’re looking at the brand channel with the most subscribers, that designation goes to T-Series, an Indian music label and film production company. As of April 2022, T-Series had 213 million subscribers and more than 16,600 uploaded videos. Learn how to grow your channel with our tips on how to grow subscribers on YouTube. (Social Blade) 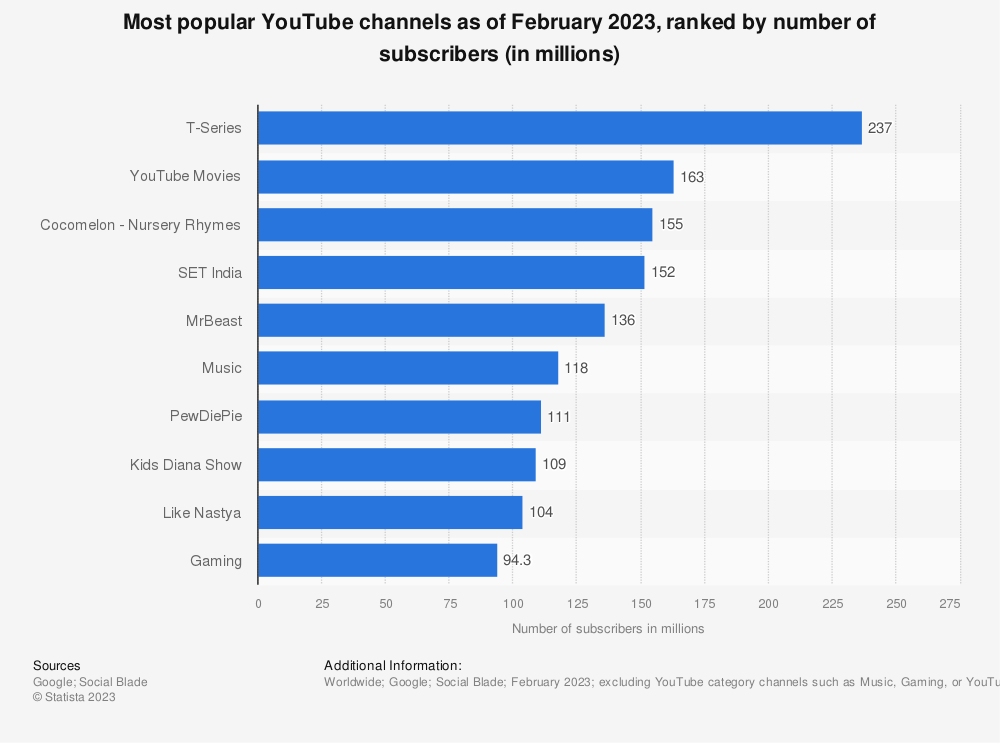 YouTube launched its monetization strategy in 2006, just shortly over a year after the platform emerged. By 2009, it offered seven ad formats to help users monetize their channels. Here’s a closer look at what YouTubers are earning these days and other YouTube money stats.

What were YouTube's profits last year?

What is the top YouTuber's income?

Jimmy Donaldson, aka MrBeast, was the estimated highest-paid earner for YouTube in 2021 with $54 million in revenue. Gamer Jake Paul took second place with $45 million. (Statista)

What is the top YouTuber net worth?

Based on overall net worth and not just 2021 earnings, the highest-earning YouTuber is Jeffree Star with an estimated net worth of $200 million. (Slice.ca)

How much money does the average YouTuber make?

The average YouTube channel generates about $18 in revenue for every 1000 ad views. However, earnings aren’t based on the number of views, but rather the actions taken on ads. If users watch your videos but don’t click on the ads, your channel doesn't earn any money. (Influencer Marketing Hub)

YouTube pays out about 68% of the revenue generated through AdSense. So, if a video earns $100 in ad revenue, the publisher will receive $68. (Google)

From gaming walk-throughs to music videos, product reviews to beauty tutorials, YouTube is a bevy of content for everyone. But what are people actually watching, liking, subscribing to, and (perhaps most importantly) buying? These YouTube usage stats can help add some clarity.

Perhaps unsurprisingly, the most-viewed song on YouTube is the "Baby Shark Dance." It has earned more than 10 billion views, the first YouTube video to ever do so.  (YouTube/Guinness World Records)

Though not all YouTube content is based on music, its most popular videos seem to be. The "Baby Shark Dance" is the most-watched video, followed by "Despacito" with 7.71 million views. (Variety)

YouTube’s size and scope hold a lot of potential for brands to provide value to their video-hungry audience. Meltwater supports your YouTube marketing strategy with data-driven insights into the content your customers love. From topics of interest to who is leading the conversation, Meltwater empowers your content ideation to help you form better connections with your viewers.

Learn more when you schedule a demo!

10 Tips to Grow Subscribers on YouTube (The Organic Way)