PR Tips: Taking Control of the Conversation in a Digital World

In 11 Lessons that PR Professionals Need to Learn in a Digital World, Jeff Bullas covers the big shift in PR that is reshaping the industry. Here Jeff offers four examples of how companies are adapting by using data to reinvent their approach to PR, including press releases, influencer relationships, social PR, and market research.
Jeff Bullas
Share14
Tweet
Share

Public relations is about communications: the message, the medium, and the content. However, the channels are changing and so is the technology. Today, communication is messy, splintered, and in real time. It’s amplified by the social web and has made everyone a publisher and a virtual reporter. Nonetheless, the message still needs to touch hearts and minds.

If you think it was hard to get your message out before the social web showed up, you were right. But now the challenge is even harder.

So how do companies, PR agencies and communications professionals transition from a world of the 7 o’clock news cycle and column inches to a noisy and distracted 24/7 digital world that never sleeps?

#1: Get Smarter with Your Press Release

You need to be more creative with your communications. Let’s imagine a PR firm that specializes in beauty and personal care sends out multiple press releases for the same product over time. A media intelligence platform provides the tools needed to compare the performance of each release and benchmarking their impact on reach, share of voice, keyword themes associated with the brand. The company can now track impact and ROI by asking and answering questions like:

#2: Work with Influencers and Advocates

The online influencer is now a credible and mainstream PR tactic, so when choosing an influencer or spokesperson to represent your brand, make sure to benchmark potential candidates by reach and media exposure. Media intelligence dashboards provide the tools to set up a separate search for each individual and then create a dashboard that aggregates and compares them all. The data doesn’t lie. It will show a clear frontrunner in terms of reach and exposure. Or maybe one top candidate has greater reach, while another one has more exposure. You can now figure out why… and make an informed decision.

Four influencers are benchmarked for their share of voice (SOV) on Twitter and in the traditional news media to help assess which ones have the strongest audience pull.

The social web has democratized communications. Comparing news coverage vs. social chatter on a specific topic can be especially useful for understanding the connection (or disconnect) between news and public opinion.

This company maps and compares brand sentiment on social channels and national news. They may want to look at their October coverage to see what caused an across the board dip.

#4: Use Data to Measure Product Performance

Social proof for brands is now about data and metrics. Imagine that an athletic shoe company is branching out to athletic wear. They have several lines of clothing they just launched (men’s, women’s, and various sports). Benchmarking for exposure, reach, and share of voice against the comparable lines by competitors wouldn’t make sense as those brands are already well-established. So the company poses a question: which of their new products is doing best? And they benchmark the different lines of clothing against each other. The data produces insights that are worth gold!

Because the company understands that a new line of business can take timeto make money, they will use this benchmarking (as opposed to simply sales figures) to help guide product decisions.

Adapting to new communication channels and media is critical. So is keeping on top of the revolution that is happening right in front of us in what is now a global village. The democratization of publishing and marketing is switching the power from the gatekeepers to the creators. The proverbial stoop where our newspapers used to be delivered to now takes many forms (smartphones, tablets, desktops, smart devices), and we must optimize the messages we deliver throughout.

Are you adapting, innovating, and embracing the change or are you hiding and avoiding it? Your attitude to change is maybe the biggest challenge you have. Over to you. 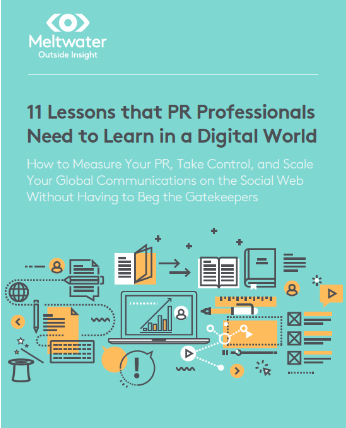 This post was originally published on our site on July 19, 2016, we republish posts for our readers that may have missed them the first time around.

PR Tips: Taking Control of the Conversation in a Digital World was last modified: December 4th, 2018 by Meltwater

How to Ace a Brand Management Interview
by Heather Satterfield