The Top 3 Social Media Trends for the Middle East

The Middle East has seen some significant growth in internet and social media usage in the last few years, and with this growth comes some interesting stats and figures that only highlight the potential that the region has for brands and businesses looking to penetrate this emerging market:

Since the Arab Spring in 2011, social media has taken the Middle East by storm, changing the digital and online communication landscape with it, with research showing that 88% of the Middle Eastern population are online and using social networking platforms on a daily basis.

What are the Top 3 Social Media Trends for the Middle East that we need to know about going into 2021? Read this blog post to find out.

How hashtags help in times of need

On 4 August 2020, the world was rocked when video footage shared online showed the port of Beirut exploding as 2750 tonnes of ammonium nitrate detonated. As reported by CNN, the explosion left 180 people reported dead and 300 000 men, women and children displaced.

Over 1 000 Middle Eastern news articles wrote about the ‘Lebanon explosion’ while more than 600 000 global  social media mentions were recorded since 1 August to date regarding the ‘Lebanon explosion’. During the week since the explosion occurred, the hashtag ‘#Lebanon’ was mentioned 369 000 times on social media globally, garnering a social media reach of just over 8 Billion people. The hashtag was heard and seen by many across the world and in the Middle East, it showed the importance of using social media to raise awareness on local social issues that the media may not give as much news coverage.

With over 27 000 global social media mentions, and 9 700 mentions in the Middle East, '#InThisTogetherDubai' brought people together digitally in the education community as the COVID-19 had caused schools and universities to close as a means of practicing social and physical distancing. Trending themes such as 'online tutoring' and 'community' emerged, with the '#InThisTogetherDubai' hashtag was positively received within the region despite the physical challenges that both teachers and students were experiencing at the time. However, despite the challenges, it was a time for the region to come together and stand in unity during a time of need.

We are #InThisTogetherDubai. Today, our experts delivered an awareness session on #COVID19 at @DXBMediaOffice. Thank you for having us.#MBRU pic.twitter.com/YY1tpE9k5g

The use of hashtags on social media, particularly on platforms like Twitter and Facebook (where there are over 187 million monthly active users on these platforms in the region), indicates how the use of hashtags are important for getting certain topics in front of a bigger audience while raising awareness at the same time. With their ability to be instrumental in the transition of movements and conversations from online to the real world and vice versa.

In a recent report, 9 out of 10 young Arabs use at least one social media platform on a daily basis., and Instagram, with more than 5 million active users, is a popular platform for the youth in the Middle East. On Facebook, 90% of internet users in the UAE are active on the platform, with young male users accounting for the majority of the country's Facebook audience demographic, while on Twitter, only 41% of online users in the UAE have a Twitter account.

Despite an overall increase of social media consumption among the youth this year, video content was a standout among the youth, and key trend to look out for in the near future.

Thanks to a one-year agreement that saw MBC Group sign an exclusive entertainment content partnership with Facebook MENA, this provided viewers access more than 20 000 videos from popular shows across the region on Facebook Watch. While the recent announcement has received a predominately neutral response from social media users within the region, the announcement did receive positive responses from social media users, with the data indicating that this is a good sign and step in the right direction in terms of how the youth have moved to consuming more video content this year. 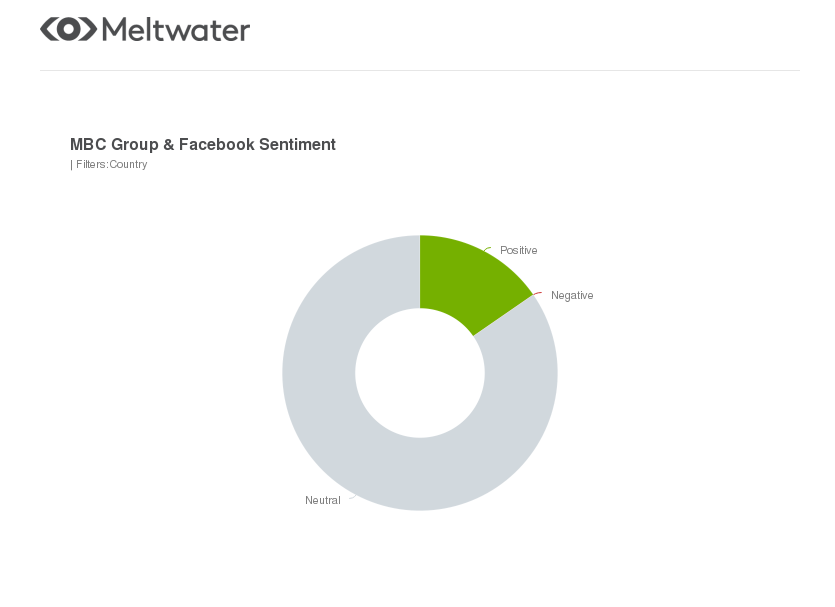 On the other hand, global streaming service, Netflix, may have also received neutral reactions from its audience on social media but it also received slightly more positive feelings than negative. With reports revealing that Netflix saw an increase in subscriptions in the UAE by 26%, this increase in viewers played a role in the positive feelings that young online audiences had towards the streaming platform, along with popular TV shows such as Modern Family being made available to viewers in the region. However, what viewers want from Netflix is more variety of shows, including anime, and better supervision of the video content already available but not culturally sensitive to the region.

The rise of digital parenting

With COVID-19 restricting social and physical movement for most of the year, parents found themselves having to adjust to a digital form of educating their children at home. However, YouTube is playing a more prominent role in the lives of Middle Eastern parents as they look to the platform to act as a third parent or advisor who offers support.

One of the top YouTube channels within the region is 'Super Somaa', featuring a Middle Easten child, and his family, who helps solve problems. The channel already has 2.56 Million subscribers, over 9 Million views and a Middle Eastern social reach of over 100 000. Social reach of the channel peaked in March of this year, as COVID-19 restrictions were put in place around the world, and self isolation practices were implemented. It was during this month that the channel shared a video on how to make pizza at home as a family, which resulted in more than 300 000 views, indicating how Middle Eastern families want quality time with their children and are using YouTube as a way to connect.

What these trends have shown is that social media usage in the Middle East is on the rise yet continually changes as the popularity of each social networking platform changes. However, what does remain is that the power of hashtags have shown to create great awareness and a sense of global unity in times of need.

Video content will continue to grow in the region, particularly among the young Arab youth, and as we enter a new digital decade while redefining the 'new normal' , parents in the Middle East are also taking to what is online for guidance and support. As 2020 comes to a close, it will be interesting to see which of these trends continue into 2021 and what trends will shift the social media landscape in the future.