For top communications and marketing organizations in the NFL, winning on social is just as important as winning in the stadium. See what the best of them can teach us about engaging fans. For extra inspiration, see examples of top social media campaigns by nonprofits, healthcare, tourism, sports teams, government agencies, and television shows! And to up your social media game, let us show you what an all-in-one media monitoring, media outreach, social listening, and social management solution can do for your brand.
Nick Rogers
Share
Tweet
Share

Perhaps no sport is more popular on social media in the United States than Football. America’s Game. NFL social accounts consistently capture the hearts and minds of audiences across the platforms they care about most.

But which National Football League teams are winning consistently on social media? We found five that are a superb source of inspiration for your brand, whether you’re a football fan or not!

The Rams are back in Los Angeles and they’re scoring more than just touchdowns for their fans. The Rams are scoring engagement points by treating their fans to a behind-the-scenes look at their favorite players and moments throughout the season.

One of the tactics that the Rams take full advantage of are Instagram Stories Highlights. Perfectly laid out at the top of their feed, audiences can go back in time and relive some of their favorite moments from the season no matter where they are. 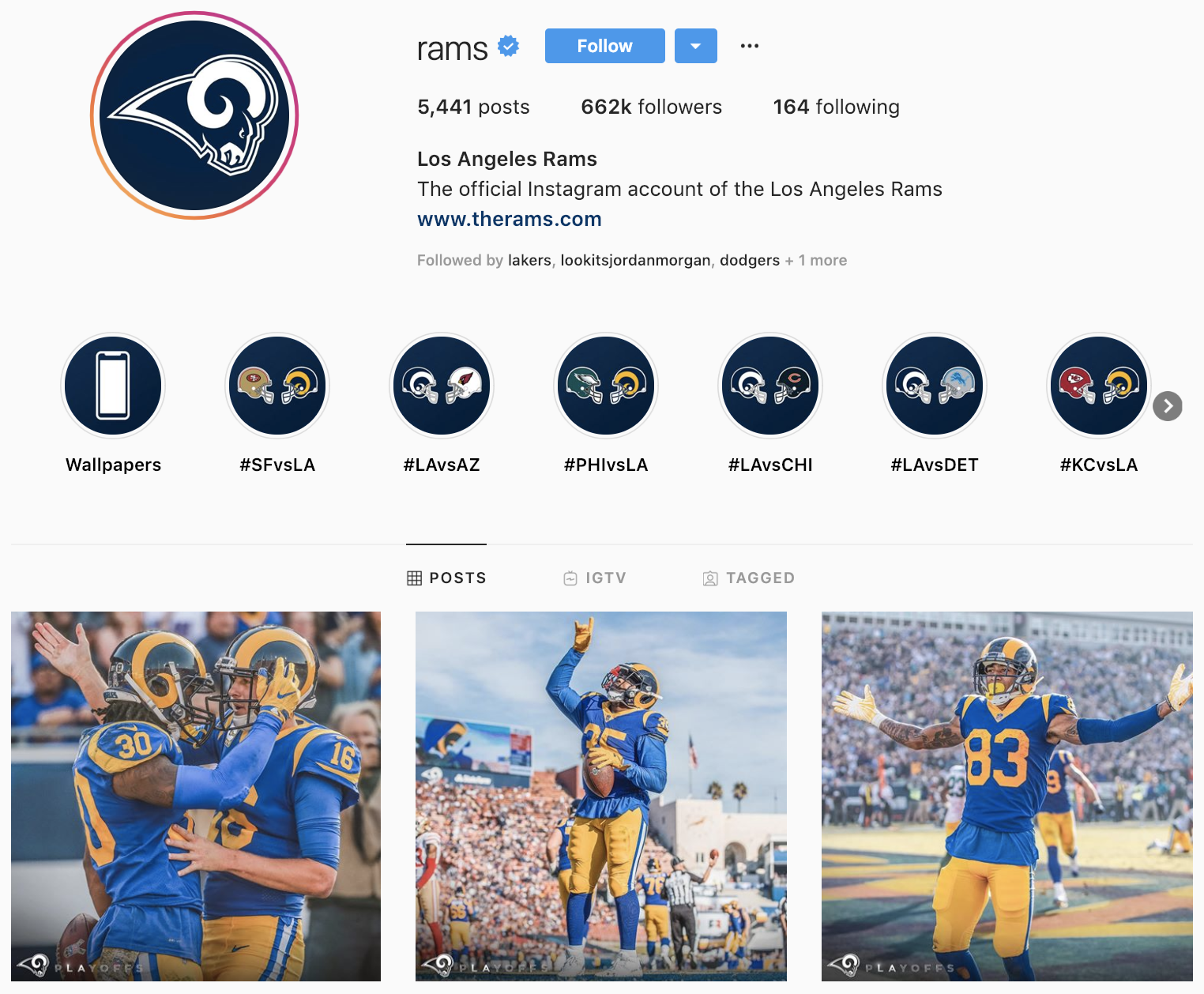 Replays aren’t just for tv. Add them to your Instagram Stories so fans can relive and share their favorite moments.

Highlights are the perfect way to curate all of your best Stories content from throughout the year. That way, none of it ever goes to waste!

Plus, notice the consistent use of imagery and visuals in their Highlights cover photos. Everything feels consistent and on-brand. It immediately catches the eye of anyone who stops by the Rams profile.

A short jaunt up Highway 101 you’ll find another California-based NFL team that is end-to-end one of the best in the business at social media marketing, the San Francisco 49ers.

With six Super Bowl appearances and five championships since 1980, the 49ers are arguably one of the greatest franchises in sports history. While this rich history is hard to match, the 49ers bring it home on social media by focusing on the future.

The 49ers invite fans on their journey forward. In return they stick with them wherever they go.

2018 wasn’t the greatest season for the 49ers, but the moment it ended, they gave fans cause for optimism ahead of the 2019 season.

Positivity, hope, and optimism are a great recipe for successful content on social media. People want to feel like they’re a part of something big!

One team that really knows how to build a rapport with their audience on social media is the Seattle Seahawks.

Their fans, or “12s” as the team calls them, are the focal point of many of the ‘Hawks social media posts—as they should be.

The Seahawks keep fans hooked by making them the stars of the show.

If your brand has a dedicated and passionate audience, there’s no better way to get them fired up than to showcase them on social media. By making their fans their #1 focus, the Seahawks were able to grow their Instagram account to more than 2.2 million followers.

What does 5 Super Bowl titles earn the New England Patriots?

But clearly, people love to hate the Patriots with their Instagram account attracting more than 3.3 million followers alone.

The Patriots don’t let haters get them down. Instead they embrace it.

The marketing team for the New England Patriots doesn’t shy away from being the center of attention, either. In fact, they play into it and it’s an important social media lesson for us all.

No matter who you are or what brand you work with, you’ll always have people throwing shade your way on social.

Sometimes the best way to come out on top is by embracing it with fun and engaging posts.

I saved the best for last when it comes to NFL teams on social media.

As with the Patriots, the Dallas Cowboys relish in being one of America’s most loved and hated teams. But that doesn’t stop the Cowboys from having a little fun on social media and showing off their team’s personality.

The NFL’s most popular team on social lets fans behind the scenes and the emotions.

Every single one of their posts on Instagram, Facebook, and other social platforms give their audience a feel for what it’s like to actually be an NFL player. This type of content makes the Cowboys seem more accessible and human which helps to increase fans’ love for their team.

And when comparing the Dallas Cowboys’ Share of Voice vs. other top teams in the league, it’s clear their doing something right: 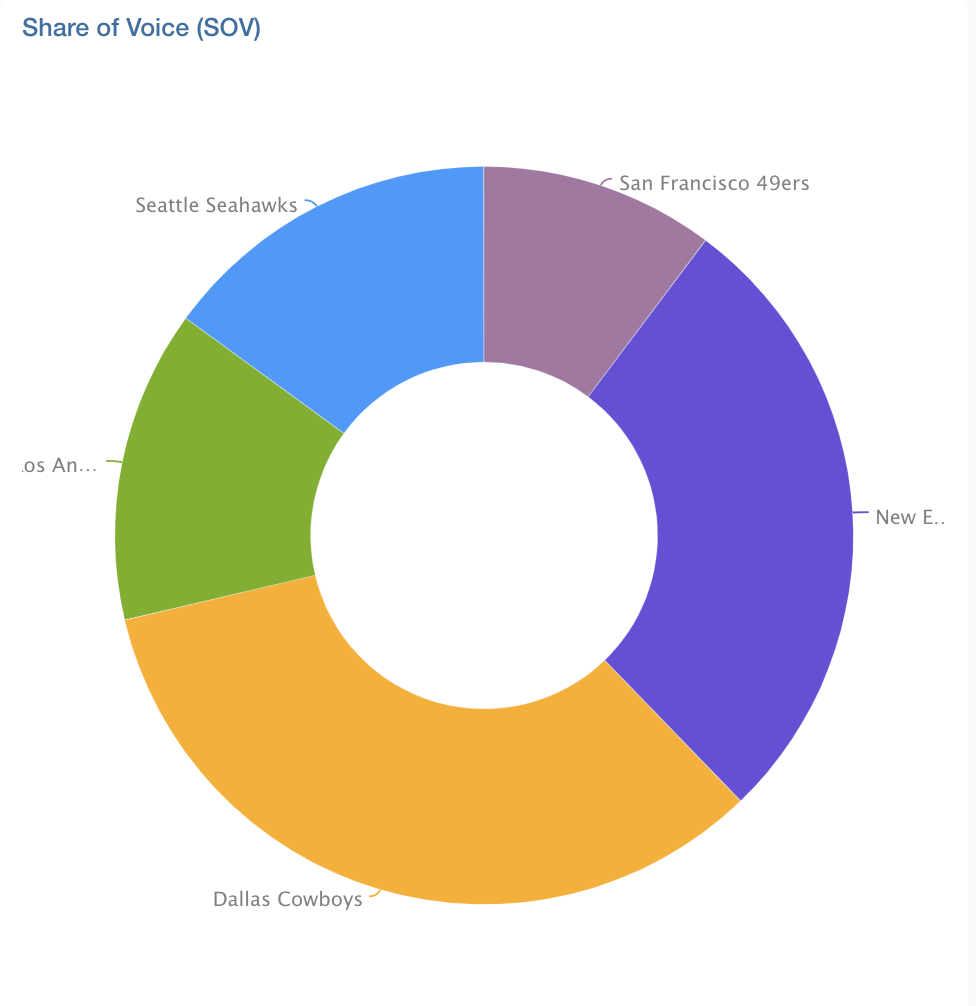 The Cowboys may not win on the field every time they play, but they’ve got everyone beat on social, as Meltwater’s social media analytics reveal.

Not only do they have the greatest Share of Voice in the NFL, but they also have the largest social media reach week-over-week:

Media monitoring breaks down social reach week by week, so brands can fine tune their strategies as they go. In the NFL, the Cowboys keep coming out on top.

No wonder they’re the most valuable team in the NFL!

At first glance, you might not think you can learn all that much from NFL teams on social media.

But they are experts at connecting with fans in meaningful ways while using various content types to spark excitement. Use these lessons in your social media strategy to drive new audiences to your accounts and increase increase engagement.

To up your social media game, let us show you what an all-in-one media monitoring, social listening, and social management solution can do for your brand.

Edgy Brands: How to Be Sassy, but Keep It Classy, on Social
by Nick Rogers