It’s difficult to say exactly when social media began, but you could argue that it really started with blogs in 1999 when LiveJournal was launched. So that means social is now 21 years old, the traditional coming of age milestone, which is oddly appropriate because this is the year it really had to grow up.

The year started dramatically, with some of the worst bushfires in history raging across Australia and apocalyptic images being shared with the world. The issue amplified discussions around man-made climate change, and social mentions of this topic peaked at nearly 1.3 million on January 5th.

On the other side of the world, the UK finally left the European Union on January 31st. This topic has dominated the country’s media agenda for the past four years, with social media serving as the battleground for the often bitter Brexit debate. When the day of departure finally arrived, social media mentions of Brexit peaked at 1.2 million.

Both of these events seemed huge at the time, especially in the countries where they occurred. But 2020 was just getting started.

Towards the end of January, the volume of online discussions about Coronavirus already exceeded those of Brexit and the bushfires combined, and that was just the beginning. On March 14th, mentions of Coronavirus topics reached a peak of 29 million, as the impact of the pandemic became clear.

Although the volume of Coronavirus discussions has steadily declined since that peak, even today, months later, it’s still a huge topic of conversation compared to those events at the beginning of the year. For most people the main consequence of the pandemic was global lockdown, with millions forced to remain in their homes and, since mid-March, that too has been a significant topic of discussion on social channels.

There was still more to come. Following a series of racially motivated murders, including George Floyd, Breonna Taylor, and Ahmaud Arbery, protests broke out across America and other countries in support of the Black Lives Matter movement. It’s difficult to track the volume of discussions for all of the issues around this event, because there are so many different threads to the conversation, but our best analysis is that social media mentions of Black Lives Matter related issues peaked at 18.3 million on June 2nd. It’s probably higher.

To put the sheer size of all this into context, last year’s biggest news story was arguably Donald Trump’s impeachment, and on the day that occurred, December 18th, it was mentioned approximately 6.1 million times. This year’s Super Bowl got 6.3 million mentions. Both big events, but both also dwarfed by two separate stories in just the first half of 2020.

The Medium and the Message

What does all this mean for social media? This isn’t just a story about big numbers, or Twitter and Facebook needing to buy more servers to cope with the extra workloads.

Lenin once said “There are decades where nothing happens; and there are weeks where decades happen” and 2020 has shown that sentiment to be true. Maybe social media is playing a part in that. The outrage felt in Minneapolis echoed across America and the world.

Within days protestors in the English city of Bristol were tearing down a statue of Edward Colston, a man whose wealth helped build the city 300 years ago, wealth which was largely made in the Atlantic slave trade. The protesters threw the statue into the same harbor that Colston’s ships sailed from. 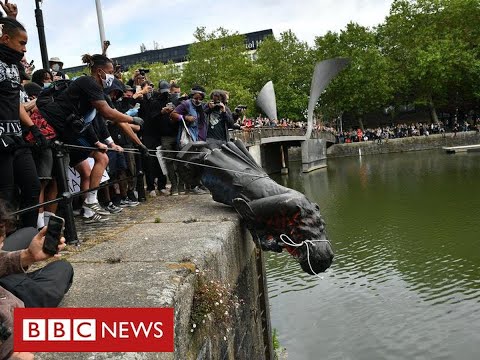 It wasn’t the first statue to fall this year, and it wasn’t the last. But the point is that a cry against injustice in Minneapolis created almost immediate action in a town halfway across the world. Could that have happened without the power of social media?

Many would argue that this reckoning has been a long time coming. Is it any coincidence that the generation which grew up with social media made it happen?

Social media is 21 years old. Anybody under the age of 30 has never really lived in a world without it, and many people older than have embraced it whole-heartedly. The ability to easily communicate, organize, educate, across national and cultural borders has had a huge impact on the current generation of young adults.

The proliferation of smartphones has had profound consequences that we are only just beginning to understand. A police officer kneeling on a man’s neck can’t be so easily ignored when every bystander has in their pocket a device that can record high definition video and instantly share that clip via social channels that will show it to the world.

The second thread of this story is Coronavirus and the global lockdown. For months many people around the world have been isolating themselves at home, cut off from all the usual day to day interactions with friends, family and colleagues. This was social’s time to shine.

Yes, investors in video-conferencing platforms must have been rubbing their hands with glee as the world sought out new ways of working, and socializing, in lockdown. But people have also turned to the likes of Twitter, Facebook, and Instagram to maintain their social bonds. People who shied away from social platforms in the past now turned to them out of necessity, while those who were already old hands relied on them even more and found new ways to use them.

Without really noticing, we’ve been living in a world where social has always been part of the backdrop to our daily lives, but all of a sudden it’s important. Maybe that’s forcing us to ask equally important questions too, like: who owns and controls these channels, how are they regulated, how do we make sure they work well for us now that we really need them?

One of the comparatively low-profile news stories of this year has been that Twitter is now fact-checking and posting warnings on tweets posted by the President of the United States. The most powerful man in the world, famous for favoring Twitter as his preferred means of mass communication, is having his communication policed by that very platform. That’s as surprising as it is profound.

With everything that’s happening in the world, nobody could call this the year of social media, but we could certainly call it the year social media came of age.