How Data Can Inform Your Marketing Campaigns: The Lion King Case Study 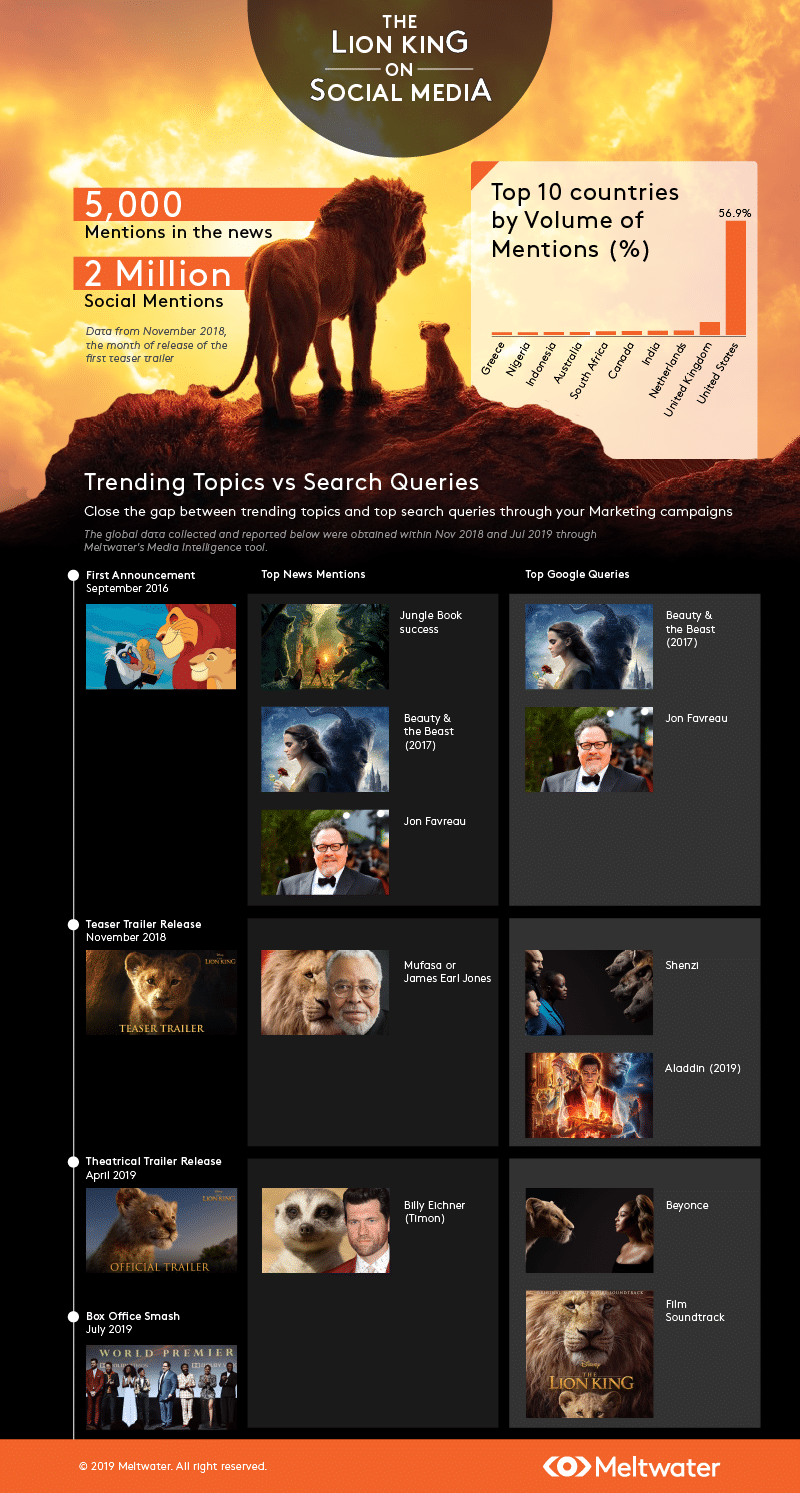 The global data collected and reported above were obtained within Nov 2018 and Jul 2019 through Meltwater’s Media Intelligence tool.

Movie remakes are always a tricky business. The cinematic brilliance that first filled the silver screens with pomp and verve will always be a part of the audience’s lives. Those who experienced that brilliance will carry with them the nostalgic baggage and instinctively resort to opening it up whilst rummaging through their old favourite clothes to wear it once again. And unfortunately, more often than not, movie studio executives love looking through the wardrobe and consider rocking the classic suits again.

This is where a data-oriented company such as Meltwater can step in to offer a solution to movie execs in treading that path of brilliance or downward spiral of notoriety for remakes. For this post, we take one of the grandest animated movies of all time – Disney’s The Lion King – and studied the trajectory before the movie’s recent release. We analysed mentions of The Lion King online versus search queries about the movie. Gaps between what users were searching for and what is mentioned online creates opportunities for Marketers.

How can Marketers pounce on these opportunities like the hyenas did on Scar?

When news first broke out in September 2016 about Disney remaking a lineup of classics in live-action – Mulan, Beauty & the Beast, and Aladdin alongside the Lion King – it was positively received but with a tinge of scepticism and worry that childhood memories would be tainted. However, critics and film aficionados were optimistic about casting Jon Favreau to direct and retell the timeless Shakespearan story of the cub that grew up to reclaim his father’s throne from his diabolical uncle. Favreau’s prior work in another Disney remake The Jungle Book greatly favoured the positive backing from the fans.

In November 2018, Disney released its first teaser trailer to The Lion King, and to call it a resounding success would be an understatement. Fans all over the world rejoiced at the sneak peek of the upcoming movie and all their fears were washed away by the rivers running through Pride Lands. There were over 5,000 mentions of The Lion King in the news around the world and more than 2 million social mentions just in November 2018 itself. Also, a name keeps popping up after the trailer’s release – James Earl Jones – which had every fan reminiscing the original from 1994. Fans were ecstatic when they heard the booming ubiquitous baritone voice of Mufasa narrate the trailer and they soaked in the nostalgia of the reanimated classic.

In comparison, global megastar Beyonce’s involvement in the project had 22,000 social mentions in the same timeframe. This interesting insight revealed that despite the presence of undoubtedly talented superstar such as Beyonce could not match the level of nostalgia and bonds that were fostered related to the original movie. By using this insight extrapolated from the data of user-generated content, marketing professionals can curate or arrange campaigns with an eye on the emotional connection fostered with the audience.

The fan base of The Lion King is vast and wide like the African savannah and during the trailer’s release, they came out in droves. Unsurprisingly, the US formed almost 57% of mentions in social media while the Brits contributed another 6%. A quick glance of the rest of the top ten countries showed interest from different continents, with South Africa and Nigeria representing the movie’s inspiration of the Motherland. Australians (7th) also showed their love for the indomitable lion family. Social media interactions in two of Asia’s most populous nations, India and Indonesia, greatly contributed to the Lion King folklore. These geo-located social insights can help marketing teams further fine-tune their Social Media Marketing strategy.

For example, these insights can drive anything from streamlining and unifying the Social media strategy that you run in each of these countries, to the amount of budget you allocate for each country.

What fans might be searching for online may not be congruent with content that is available online. This creates an opportunity for Marketers to create campaigns around what their audience want but is not found online yet. The infographic further details how the top topics mentioned online about Disney differs from the top search queries in the same period of time.

Furthermore, during the trailer release, another interesting insight from Social Media mentions  was that many fans were puzzled why the film was called “live-action” when there weren’t any “live” actors involved. By using this insight, marketing and communication departments can address this misunderstanding and resolve lingering doubts and tone down negative sentiment towards their production. 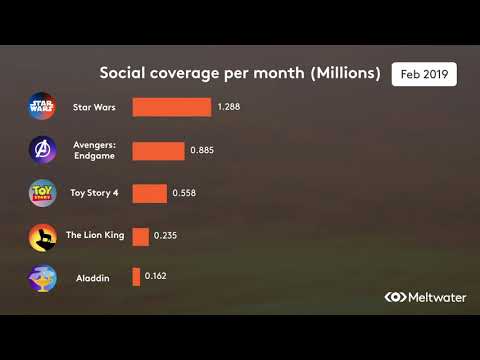 Measuring the success of Lion King and other Disney movies

Disney’s user-generated content (UGC) is a heaven for marketing departments to discover insights. To illustrate a greater picture of Disney’s UGC, Meltwater flips through the pages of its catalogue for 2019 – The Lion King, Aladdin, Toy Story 4, Star Wars: The Rise of Skywalker and Avengers: Endgame. Just like Buzz’s catchphrase, Disney’s UGC from social media is infinite and definitely beyond expectations, with the movies collectively generating almost 105 million unique social mentions since The Lion King trailer.

Obviously, Avengers: Endgame traversed the cosmic social universe and gripped the social media world like Thanos’ Infinity Gauntlet with more than 68 million mentions. This has to be attributed to 10 years of developing content within the Marvel Cinematic Universe and fans built an emotional connection with the series coming to an end. It must also be pointed out that the long-awaited final chapter of the Skywalker saga only arrives in cinemas this December while the rest have already hit their peaks. The intergalactic soap opera is also the only movie which had more than a million mentions throughout the period. Toy Story 4 also generated more mentions than The Lion King but this could be attributed to the release dates of the respective movies.

With the Lion King roaring away in the box office, it goes to show that movie remakes are not grounds that have to be left untouched. With careful consideration of nostalgia and respect to the original material, the audience will view it in a positive perspective that it is a method of paying homage while introducing new generations to the legend of Pride’s Rock.