7 Ways to Get out from Under the Instagram Shadowban

For the past five years, Instagram has been an important tool for marketing and PR pros, allowing brands to produce everyday imagery to connect with audiences. But, now the rules are changing, Facebook (IG’s owner) is pursuing ways to monetize the platform and that may affect your efforts to boost organic engagement. In this article, we look at how you can keep the platform engagement you’ve worked hard for. Once you've read it, find out how comprehensive Instagram listening can help you maintain and grow your brand engagement goals.
Janniefer Chan
Share
Tweet

More and more companies are noticing a drop in Instagram engagement, despite the fact that the platform’s growth is accelerating. As soon as brands started noticing the drop-off and eventually compared notes with each other, theories emerged as to why certain posts were seemingly being suppressed, and the phenomenon was labelled a shadowban. In fact, the Instagram shadowban started being mentioned on social media in November 2016. By June 2017 it became a much-speculated-about trending topic. Here we look at what top brands and influencers on Instagram have been able to piece together and the best practices that have emerged to help PR and social media pros keeping building engagement on the platform.

Mentions of the Instagram shadowban don’t appear on social media until mid-November 2016, but since late March 2017 they’ve been gaining steam. (Graph from Meltwater Media Intelligence platform.)

It’s important to note that Instagram has never acknowledged an official policy for “banning” posts or hashtags. However, brands and influencers report that their engagement on the platform has decreased over the last six months. As Amanda Casela from ldn rose recently reported, “I noticed that I was getting close to no new followers a day. Previously I would get around 5-8 new followers a day (albeit I would also lose at least 3 a day ha!). The lack of new followers wasn’t too concerning. But, the drop in likes and comments was frustrating.” Taken together, anecdotal evidence points to something going on. 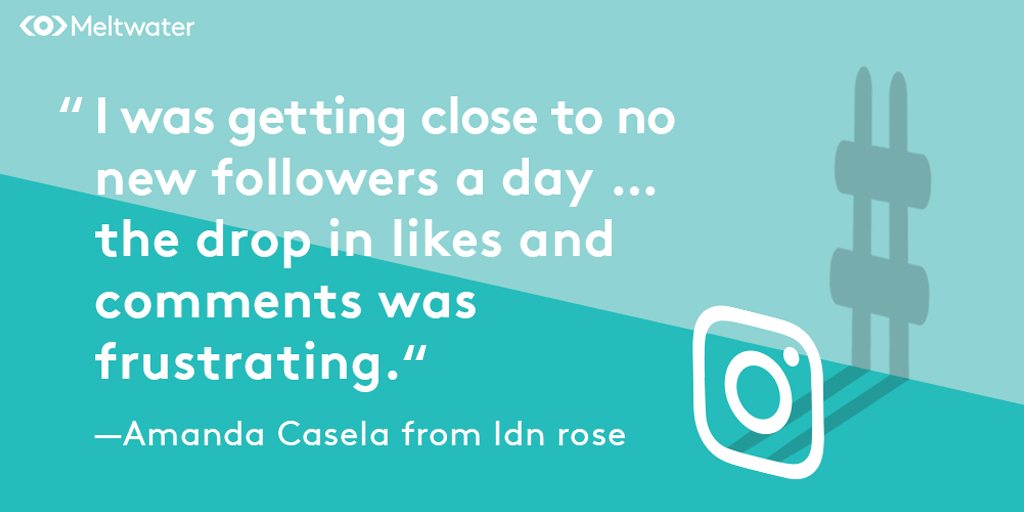 In previous posts, we’ve covered hashtag use as a way of hooking audiences that might not be following you. But with the shadowban, it seems like the use of hashtags has led to posts being suppressed. Hashtags are essentially a search feature, and by associating your branded hashtag with a related one (preferably one that’s trending), you’re increasing the chances of your content being found. For instance, someone might type the associated hashtag into Instagram’s search field. Or they might simply click on the hashtag in a post they’ve come across. But what if the hashtag you’ve associated yourself with leads to the opposite, and your post fails to show up in search results or public hashtag streams?

It isn’t an official term but is being widely bandied about. As Maggie Marton from BlogPaws speculates, “….shadowban waters are pretty muddy. We reached out to Facebook (they own IG) for additional information. One thing we learned is that “shadowban” isn’t an official term at Facebook. It appears to be the pop culture term—along with ghost ban, stealth ban, or shadow ban.”

The shadowban has been associated with the use (or misuse) of hashtags, discovered when users started conducting some experiments. As Moonlit Creatures explains, “I’ve gone through ALL my hashtags and discovered that the #boho hashtag is broken. Using even one broken hashtag will render ALL your other tags useless! I don’t know if just this one thing will fix all my insta problems, but I’m staying optimistic.” In other words, a post with an “offending” hashtag will not show up in searches for any of the other hashtags listed in the post.

As a result of being shadowbanned, only your current followers will see your hashtagged posts as they show up in their stream (and if your followers were to re-gram your images, these images would be subject to the same shadowban). Not only does this limit your engagement with the greater IG community, but it can also lead to a stagnant or even negative growth rate. Obviously, the exact opposite of what we want.

Understanding the shadowban has become an even bigger priority since Instagram now allows stories to be hashtagged to receive additional platform exposure based on these hashtags. It has been speculated that Instagram’s hashtag scrutiny is motivated by their attempt to use hashtags for ad planning, and stop users from getting attention when they use irrelevant hashtags or overload posts with hashtags, thereby making the hashtag taxonomy less effective.

While brands still think of the shadowban as a problem, Instagram has avoided addressing related issues as bugs that need fixing. Instead, the platform has tried to provide guidance on the level of content: “We understand users have experienced issues with our hashtag search that caused posts to not be surfaced. We are continuously working on improvements to our system with the resources available. When developing content, we recommend focusing on your business objective or goal rather than hashtags.”

If You’re Caught in the Net of the Instagram Shadowban, What Should You Do?

Go here to check the posts you think may be affected. Be warned that this is an educated guess as to how the algorithm is identifying posts to shadowban. Another way to check is to log out of your account, search for the hashtags you’ve used in a specific post, and see if that post comes up in the search results. If your images aren’t showing up, posts with this hashtag might be flagged.

Then, Grab Strategies for Success from Top Instagram Influencers

It’s possible that Instagram will assess the impact on their channel as a whole and decide for themselves whether they will lighten the restriction or worse, increase them. If all this lowered engagement, excuses about resources, and lack of acknowledgement of a ban seems a little too convenient, there is always the option of taking out an ad. As Alexander from the Preview App remarks, “Instagram rolled out its Business Profile features. It wants you to pay THEM to get more engagement.”

To further protect your engagement and monitor the health of your keywords, see a demo of how you can keep track of what matters to you on Instagram.

7 Ways to Get out from Under the Instagram Shadowban was last modified: January 22nd, 2019 by Janniefer Chan

Why Is Everyone Ignoring Your Press Release?
by Ambera Cruz

3 Tips For Trouble-free Monitoring On Social Media
by Meltwater