Trending Hashtags: How to Reverse Negative Sentiment for Your Brand or Influencer

On social networks such as Twitter and Instagram, the use of hashtags has increased explosively since 2012. Hashtags are used to follow conversations for trending topics, and in some cases can propel posts to become trending topics themselves.

Nowhere are trending topics more time sensitive than during events. For example, if you attend Outside Lands, an annual music festival in San Francisco, you might be interested in tracking conversations around the festival as they’re occurring. With a little research, you’ll notice that the official hashtag #outsidelands is predominantly picked up by brands associated with the event while an organic hashtag #osl2016 is what festival attendees use. Posts tagged with #osl2016 are hyper-relevant and current and brings you into the social conversations literally happening all around you—photos, insights, opinions—that you wouldn’t otherwise have access to. 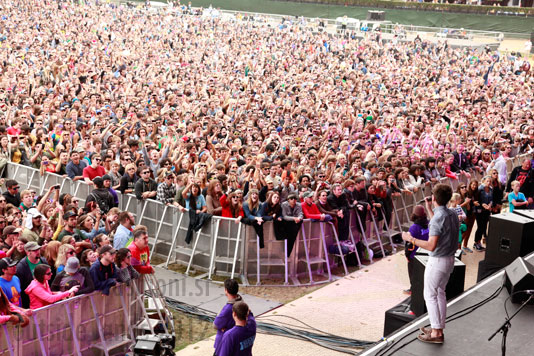 Lost in the crowd (at Outside Lands)? Let an event hashtag guide the way.

Now, let’s say you’re with the PR agency helping to promote the event. Beyond your interest in the number of attendees using these hyper-relevant hashtags to discuss the festival, you can get a bird’s eye view of how this socially vocal and connected group feels about what’s going on around them. Sentiment is an assessment of these feelings based on the positive, negative, and neutral words being used in posts. This scoring system, based on an algorithm that uses natural language processing, acts as a barometer of general trends.

As studies have shown, language has a tendency to skew positive, and that includes brand mentions on social. Neutral sentiment can be thought of as the movable middle, which means that a spike in negative sentiment will pull neutral sentiment in its direction without affecting the amount of positive sentiment. But what do you do to reverse course?

What do hashtags have to do with sentiment?

One of the most effective ways to counteract negative sentiment is associating a positive hashtag to the topic at hand. Things will start to turn around if you can get the hashtag trending. We saw this in practice with two very visible women. First, Leslie Jones and then, applying what she learned from this experience, her impact on Gabby Douglas.

Famous people’s @mentions are likely to have a certain amount of negative mentions because increased eyeballs on you and your work means increased scrutiny. Ever since the announcement of the all-female Ghostbusters, Leslie Jones (@lesdoggg) has been on the receiving end of aggressive backlash. Though she stars, alongside Kristin Wiig, Kate McKinnon, Megan McCarthy, and Chris Hemsworth; Leslie Jones was singled out in a way that the others were not. As the date of the film’s release approached, as well as its accompanying marketing push, her visibility on entertainment and associated social media increased. Where the other cast members were criticized for starring in the film, Leslie’s social media mentions received a side of racism with the criticism. Trolling reached a crescendo on July 18. That’s when Milo Yiannopoulos credited her with offensive and faux posts on Twitter. The thinking was that she “deserved” a negative backlash because she, herself was racist, homophobic, etc…

On July 18, @MarsinCharge, an active member of black Twitter proposed the hashtag, #LoveforLeslieJ, and it began trending. Picked up by various celebrities and friends of the star, it turned the conversation around. Central to this strategy was the inclusion of the word “love” in the hashtag, making it unmistakably clear that the hashtag is a show of support and throwing sentiment firmly into the positive. It helped that this support for Leslie also led to Milo Yiannopoulos being “banned for life” on the platform. Public bans are a recent move by Twitter, whose track record of dealing with platform harassment had been previously criticized.

Looking at Leslie Jones’s sentiment from January 1 to the present (below), we see that it skews positive with a slight increase in negative sentiment in March, when marketing for Ghostbusters began. In July, when the bullying and trolling kicked in, negative sentiment spiked and positive dipped. Then #LoveforLeslieJ took hold, and the trend began to reverse. As her enthusiasm for the Olympics—and related appearances on NBC—increased her visibility, we see the score now safely turned back to positive.

It’s been up and down for Leslie Jones. #LoveforLeslieJ seems to have finally turned things around.

As we see below, going into the Olympics, Gabby Douglas, having won team gymnastics and all-around gold for 2012, was trending positive. On August 7, her negative sentiment spiked (and positive dipped) after she failed to qualify for competition in the all-around final. On August 9, sentiment climbed back up after her performance on the uneven bars helped Team USA win gold for Women’s Gymnastics. While on the podium, a complaint that she didn’t place her hand on her heart during the US anthem resulted in a new burst of negative sentiment, leading to more sentiment seesaws as defenders and detractors debated her attitude.

Sentiment for Gabby Douglas flip-flops throughout the first week of the Olympics.

On August 15, Leslie Jones threw some of her influencer status behind a hashtag for Gabby Douglas, paying it forward with #Love4GabbyUSA. Supporters amplified this hashtag throughout social media. Shonda Rimes throwing an overwhelmingly positive tweet into the Twitterverse didn’t hurt. It took a day, but by August 16, Gabby’s positive sentiment climbed from 36% to 52% and on to 60% by the 19th, the effective end of gymnastics competition. It hovered around this range through the weekend, but as the announcement that she’ll be a judge at the 2017 Miss America pageant went out on Monday morning, August 22, social media sentiment began to trend negative again. Looking at some of the negative tweets, they seem to be the work of bots. Algorithms favor original, non-duplicated content so, authentic positive mentions and positive hashtags should eventually overtake them. (Also, the trolls will eventually move along to another target, as they do.) Social media has a self-perpetuating effect of spurring similar conversations as soon as they start, so start positive and more positive will follow. This “me too!” aspect helps keep trends going.

#Love4GabbyUSA did its job until the bots came after her.

As we can see from Gabby Douglas’s year-to-date sentiment below, it is mostly positive. The recent August sentiment skews negative, but in the scheme of the year, this should be but a bump in the road. But a little intervention (thank you, Leslie Jones) never hurts.

So, the question remains, does it make sense to launch a #hashtag campaign to change the conversation to support your brand?

Launching a hashtag in support of your brand should be a key part of your publicity playbook. The viral nature of positive and negative sentiment can alter the opinion of a brand, public figure, or important topic. If you’re able to get a hashtag going and even get influencers in the mix to get it trending, taking this route can shift a conversation from negative to positive and change the tide.

To see your brand’s sentiment in action, ask for a Meltwater demo.

Trending Hashtags: How to Reverse Negative Sentiment for Your Brand or Influencer was last modified: July 14th, 2017 by Meltwater

A Match Made in Heaven: Interactive Content & Social Media
by Kerri Rogers